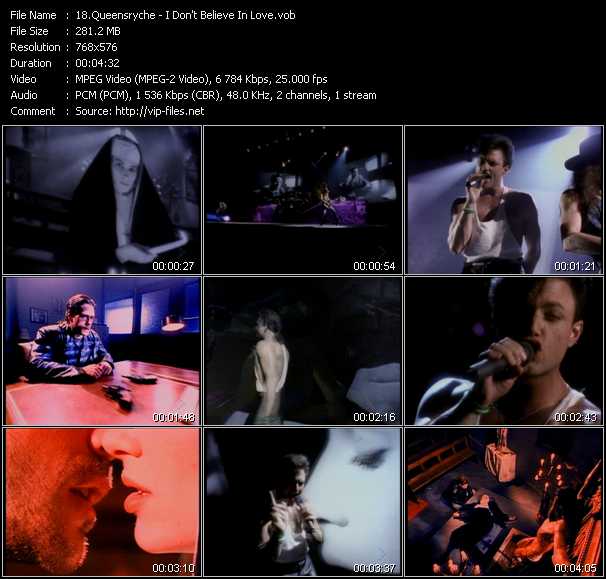 Queensrÿche started as The Mob in 1981, by guitarist Michael Wilton, drummer Scott Rockenfield, guitarist Chris DeGarmo and bassist Eddie Jackson. Without a singer, they recruited Geoff Tate to sing for them at a local rock festival. At the time, Tate was in another band called Babylon. After Babylon broke up, Tate performed a few shows with The Mob, but left the group. In 1981, The Mob put together sufficient funds to record a demo tape. Once again they asked Tate, who was in another band Myth, to do the vocals and they recorded four songs “Queen of the Reich”, “Nightrider”, “Blinded”, and “The Lady Wore Black”. As the name “The Mob” was not available, they decided to name the band Queensryche after the first song on their demo tape, “Queen of the Reich”. In 1983, Queensryche released their demo tape as a self-titled EP "Queensryche". After the EP garnered international praise, receiving much airplay and selling an unusual amount of copies for a small independent release, Tate agreed to leave Myth and become Queensrÿche’s permanent lead singer. With the 1st full-length album "The Warning" in 1984 and their follow-up album "Rage For Order" in 1986, Queensryche continued to prove their worldwide dominance as one of the most respected and creative bands of the 80's. The band received worldwide acclaim after the album "Operation: Mindcrime" in 1988, which is often considered one of the greatest concept albums of all time. The follow-up album in 1990 "Empire" was also very successful and included the hit single "Silent Lucidity". The band has received three Grammy Award nominations for songs off both albums; Rockenfield also received a Grammy nomination outside of Queensrÿche. In 1997, guitarist and primary songwriter Chris DeGarmo left the band for personal reasons. Over the years, his replacements have been Kelly Gray, Mike Stone, and Parker Lundgren, respectively. In a band meeting on April 12, 2012, which Tate did not attend, the band members discussed outsourcing the fanclub and merchandising, resulting in the firing of Tate’s stepdaughter, Miranda, from running the band’s fan club. Wilton, Rockenfield, and Jackson also fired the band manager, Susan Tate, because of ongoing “arguments and division” over decisions and “feelings that Susan Tate was not working on the behalf of the band as a whole.” On April 14, 2012, before the soundcheck for a show at the HSBC Arena in São Paulo, Brazil, Tate inquired with Wilton, Rockenfield, and Jackson why they had fired his wife and stepdaughter, and the other band members asked Tate questions about the deal with Zoetifex Studios. Following that São Paulo incident, Tate was fired from the band and replaced with Crimson Glory singer Todd La Torre. On June 12, Tate and his wife filed a lawsuit in a Seattle court against his former bandmates, claiming that he was illegally fired from the band. They also sought a preliminary injunction to prevent both the plaintiffs and the defendants from using the Queensrÿche name. On July 13, 2012, the Washington state superior court defeated this motion, as well as a motion for a preliminary summary judgment filed by the defendants. The court ruled that both parties may use the brand Queensrÿche until the next court date. As a result of the judge’s preliminary verdict, there are currently two versions of Queensrÿche until the court date or a settlement will determine who may officially own the name and imagery. Geoff Tate fronted version of Queensrÿche (2) released their album Frequency Unknown on 23 April 2013. It was revealed to the public on April 28, 2014 that Rockenfield, Wilton and Jackson were given the exclusive rights to the Queensrÿche trademark and that Tate received the rights to Operation: Mindcrime (which has to this date made 2 albums). Queensryche, the lineup comprised of Todd La Torre, Michael Wilton, Parker Lundgren, Eddie Jackson and Scott Rockenfield released their new self-titled album on 24 June 2013. “Queensryche” album sold around 13,500 copies in the United States in its first week of release to land at position No. 23 on The Billboard 200 chart.

I Don't Believe In Love - Queensryche