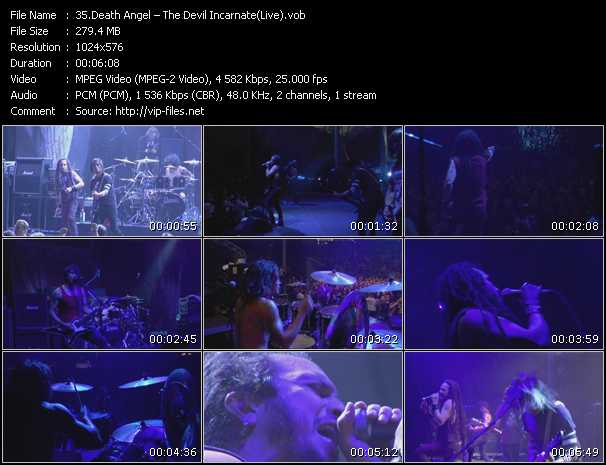 Thrash Metal (Heavy Metal) band from San Francisco, CA. Death Angel (2) was formed in 1982 by cousins, guitarists Rob Cavestany and Gus Pepa, bassist Dennis Pepa and drummer Andy Galeon. Mark Osegueda, who is second cousin to the founding members and was their roadie, joined as the vocalist in 1984. Death Angel were a mainstay of the Bay Area thrash movement in the early 80s and recorded their demo, Kill As One, produced by Metallica's Kirk Hammett. The success of the demo which was credited to the underground tape-trading scene, led to a record deal with Enigma Records. Their debut album, The Ultra-Violence, was released in 1987. The follow up, Frolic Through The Park, was released in 1988, which spawned the single "Bored" and was later featured in Leatherface: The Texas Chainsaw Massacre III. Geffen bought Death Angel out of their record deal with Enigma in 1989. In turn, Enigma released an unauthorized Death Angel live album, Fall From Grace, without their knowledge. Their third studio album, Act III was released in 1990. The album features the singles "Seemingly Endless Time" and "A Room with a View", and received heavy rotation on MTV's Headbanger's Ball. The group's tour bus crashed in Arizona en route to a show in Las Vegas, Nevada. Drummer Andy Galeon was critically injured and required more than a year to recover. At the urging by Geffen to continue the tour without Galeon, the band refused and were eventually dropped. Osegueda said he quit the band two days after accident and moved to New York. The band eventually parted ways. In the time of their breakup, the members were involved in various music projects. At the request of Chuck Billy of Testament, they reunited for a one-off gig for the Clash of the Titans benefit concert. However, with Gus Pepa was living in the Philippines at the time, Ted Aguilar was brought on as his replacement. Due to the positive reception, they played various gigs throughout the San Francisco area. In October 2003, they were signed to Nuclear Blast, and released their first album in 14 years, The Art of Dying, in 2004. Invited by Dave Grohl to record at his studio, they recorded and released Killing Season in 2008, their fifth studio album and the final studio album featuring the original line up. In October 2008, it was announced that Dennis Pepa was leaving the band. The following year, Andy Galeon was forced to leave the band due to his commitments as a new father. Their sixth studio album, Relentless Retribution, was released in 2010. It was produced by Jason Suecof and Rob Cavestany and marked a return to their trash metal sound. Now featuring Damien Sisson on bass and Will Carroll on drums, the line up also released The Dream Calls for Blood in 2013. Cavestany stated that he saw The Dream Calls for Blood as a companion piece to Relentless Retribution and once again, produced the album with Jason Suecof. It has been their most well-received album since Act III, landing at number 72 on the Billboard 200 and selling 5,400 copies in the US in its first week of release.