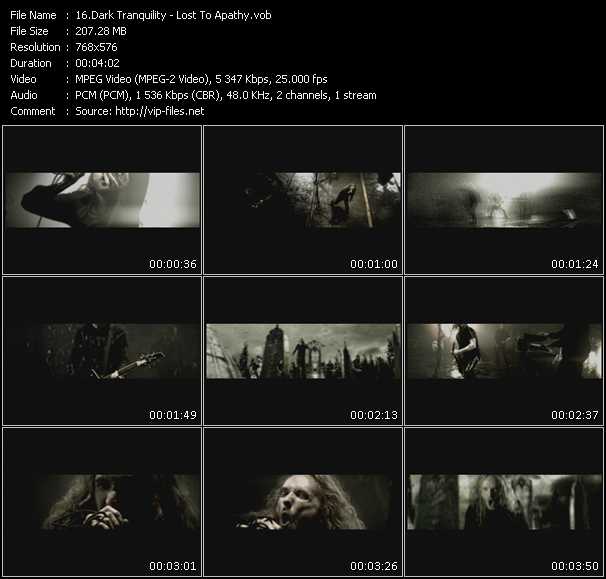 DVD: Manifesto Of Metal For The Masses

DVD: Manifesto Of Metal For The Masses

Dark Tranquillity is a metal band from Gothenburg, Sweden, founded in December 1989 under the name Septic Broiler by Anders Fridén (vocals, later frontman of In Flames), Niklas Sundin (guitar) and Mikael Stanne (guitar), Martin Henriksson (bass) and Anders Jivarp (drums). Having recording the demo "Enfeebled Earth, they changed name to Dark Tranquillity in 1991. Together with At The Gates and In Flames, Dark Tranquillity is often considered to be on of the creators of so-called Gothenburg metal or melodic death metal style. In 1991 the bands first demo, "Trail of Life Decayed", was recorded and was followed by "A Moonclad Reflection". In 1993 they finally released their first full-length album, "Skydancer" which featured guest vocalists Stefan Lindgren and Anna-Kajsa Avehall. In 1995 the EP "Of Chaos and Eternal Night" was released. Shortly after vocalist Anders Fridén left the band so Stanne had to take over vocals and let the new member Fredrik Johansson take care of his guitar role. Same year the band was signed to Osmose Productions and then they released "The Gallery" which featured Frasse Franzen and Eva-Marie Larsson (vocals). The bands success increased and a year later they released the MCD "Enter Suicidal Angels". In 1997 "The Mind's I" was released and, again, featured guests, one of them being previous vocalists Anders Fridén. After the release they left Osmose Productions and were instead signed to Century Media. In 1999 "Projector" was released. After the release Fredrik Johansson left the band but the bands bassist Martin Henriksson took over his part as guitarist. Two other members then joined the band, Martin Brändström (keyboards) and Michael Niklasson (bass). In 2000 "Haven" was released and then in 2001 the band went on a tour with drummer Robin Engström as Jivarp couldn't. "Damage Done" followed in 2002 and the compilation album "Exposures - In Retrospect and Denial" in 2004. Character was the seventh release from Dark Tranquillity, released in 2005, and was held in much critical praise. It featured the first music video released by Dark Tranquillity to feature the band itself, with the single "Lost to Apathy." In 2007, Fiction was released, which in turn, saw a return of Mikeal Stanne's clean vocals, and the first female guest vocalist since Projector. In August 2008 the band announced that bass player Michael Nicklasson had left the band due to personal reasons with no hard feelings between him and the band. Replacement was announced on September 19th 2008 when Daniel Antonsson, former guitarist of the band Soilwork, joined the band. Antonsson quit the band in 2013 and Anders Iwers (of Tiamat) filled in as a live bass player. In March 2016 the band announced that founding member Martin Henriksson had quit the band after 26 years. In September 2016 Anders Iwers became a permament member of the group. Current line-up: Mikael Stanne - Guitar (1991-1993), Vocals (1993- ) Anders Jivarp - Drums (1991- ) Niklas Sundin - Guitars (1991- ) Martin Brändström - Keyboards, electronics (1999- ) Anders Iwers - Bass (2016- )